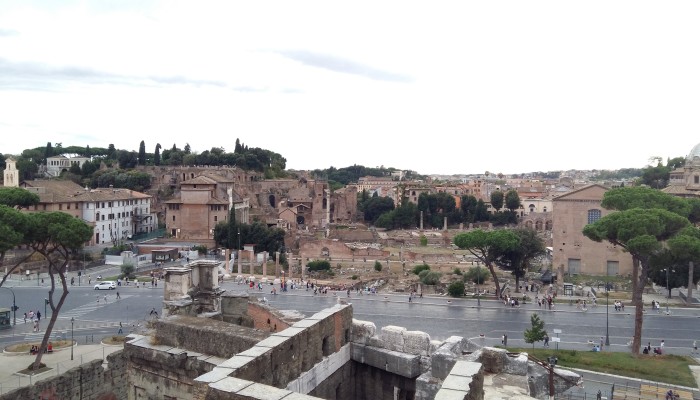 The history of the Maritti Residence goes back approximately 300 years, when the Corteggiani family, originally from Corsica, moved to Lazio and then to Rome at the end of the XVIII century.

The first documented news is from 1826 when Antonio Corteggiani marries Angela Aleggiani and purchases a three storey house in Via Tor De Conti (as designed in the map of 1653) as well as a nearby three storey medieval property with wooden beams. Antonio and Angela had 5 children.

Stanislao (1860/1929) married Adelaide Romanini, who was related to the Barbiellini/Amidei family; they had no heirs.

Giuseppe Corteggiani (1856/1940) married Agnese Giomini related to the Caracciolo family. They had 7 children, the youngest being Rodolfo Corteggiani.

Towards the end of the 1800s, due to the high numbers of immigrants from Piemonte to Rome, the two brothers Stanislao and Giuseppe restructure and enlarge the buildings purchased by their father Antonio, giving the building its present aspect.

While excavating to strengthen the foundation of the building, some Roman statues of young women were found, then sold to an international antique dealer for the sum of 100.000 lire. The property that had been owned by the two brothers Stanislao and Giuseppe was later divided between the heirs, that is the seven children of Giuseppe and Agnese: Olga, Elena, Bianca, Guglielmo, Giorgio, Enrico and Rodolfo.

The latter married the Marquise Maria Corsi, who gives birth to their only daughter Daniela Corteggiani.

Daniela married Luigi Maritti and together they tried to put the property back together– it had been divided between the various heirs of the family – to provide a future to their sons Massimiliano, Gianluca and Pierfrancesco.

In this way after nearly 100 years, in 1998 the restoration work began first on the facade, on the common rooms and the terrace. They then opened the venue “Lupigiada” with the aim of promoting all the Arts, from music to figurative arts, sculpture, and drama, gastronomic and wine appreciation.

Daniela’s project was to respect the original environment but above all to continue to keep the history of the family alive in particular that of the Corteggiani sisters, Daniela’s aunts with their artistic passions, their taste and their personalities.

This is why the original design and deco of the “aunts” is carefully conserved in some rooms of the apartments on the first floor which are dedicated to them: Zia Olga, Zia Elena and Zia Bianca.

The third floor, with frescoed ceilings and tiled floors, is filled with decorative nuances, prints and paintings which preserve the memory of the Marquise Maria Corsi, Daniela’s mother, who lived here for many years.

The fourth floor is distinguished for its extraordinary brightness and for the ease of space distribution, conserving the style of the early 20th century in the granolithic floors. It has been decorated with taste and also enriched with paintings and sculptures by both famous and newly emerging Italian painters.

Thanks to Luigi Maritti’s far reaching vision, his tenacity and enterprising skills together with Daniela’s great sensitivity and hospitality we are lucky to be able to spend time immersed in the history of Rome and in the story of a family which for over 300 years has its roots in the center of a unique city of the world.